More Dragons of Tirenia on the way!

Hi folks, we just wanted to say thanks for all the interest you have shown in our little game module this week. We're a husband and wife team, both working and parenting full time, so we don't have a lot of time to dedicate to this project, but it's something we have been working on for over six years in one way or another. As such, we have a lot of adventures and even campaigns we have run in this world that have been run for our friends but never written down for public consumption. We intend to change this.

We were ambitious and hoping to release a typical hardback book in the style of most other 5E publications, but honestly that sort of project is for people who are more time (and money) rich. For the moment we are going to focus on serving the needs of the people interested in our setting by releasing smaller adventure modules, and eventually campaign modules too. In time, we will Kickstart a deluxe/collected version of these, but for now, we might as well supply you with the thing you really want, which is playable content!

The next thing you will see in the Dragons of Tirenia line is the Guide to the City of Fiumenze, with the adventure 'Death of an Artist' included. Following that, we intend to do a player focussed guide where we give deeper info on class and heritage options, and we will include a solo pick-a-path adventure in that. We intend to follow up with more combined city+adventure guides, and eventually campaigns. Here is some of the stuff we have planned, from adventures we have run before and others we are currently working on (all of the following are working titles only!):

Please consider following us on any one of our social media or blog accounts to get the updates when they happen. The link to those, and also our mailing list, are all on www.skybeargames.com

We look forward to supplying you with many more happy roleplay sessions!

What would you like to see from us next? We would love to know which modules you'd be most interested in. 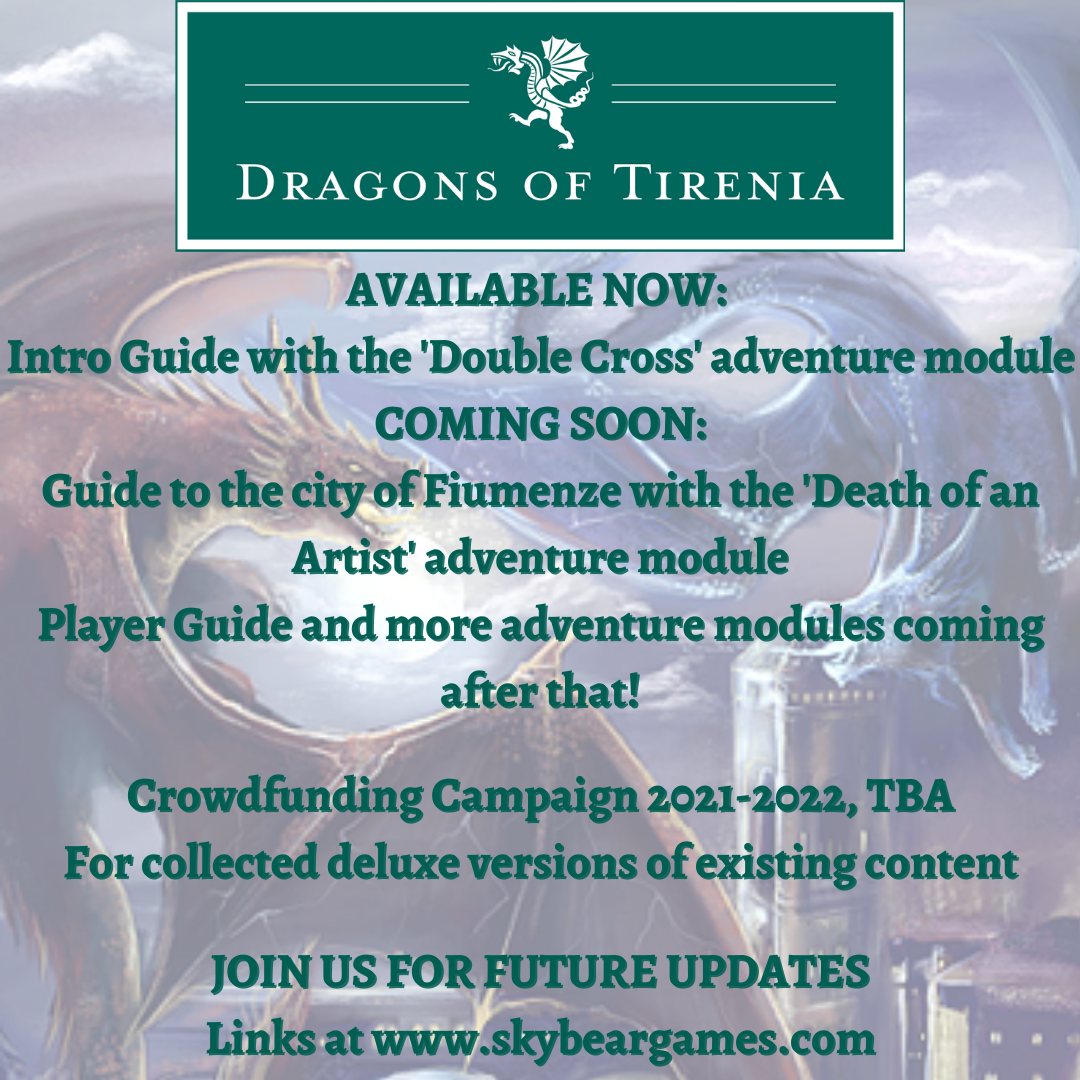 Get Dragons of Tirenia Adventure Module: Double Cross (for use with 5e)

Dragons of Tirenia Adventure Module: Double Cross (for use with 5e)

The adventure 'Double Cross', and the introductory guide to Dragons of Tirenia, a new RPG campaign setting (using 5e)